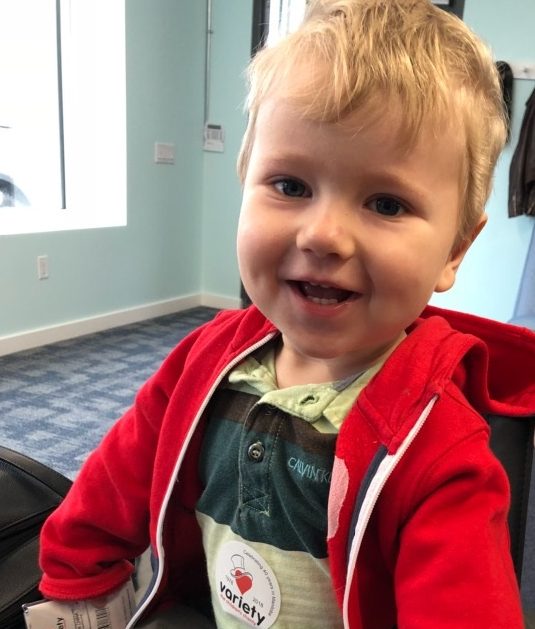 Posted at 13:49h in Stories by VarietyManitoba
0 Likes

Henry was born with a condition called Arthrogryposis Multiplex Congenita (AMC). Early and consistent intervention and care is really important for Henry’s development and continued physiotherapy, occupational therapy and a series of surgeries will help Henry be as independent as possible. Both of Henry’s parents work to make sure he can access all the services and specialized equipment to help with his development. In late fall 2018; Henry began an intensive surgical intervention plan in order to maximize his response to treatment with a goal of being more closely aligned with his same-age peers by the time he is of school-age.

Unfortunately, because these surgeries could really help Henry, he was deemed not eligible for publicly funded supports until such time as the outcome of his surgical interventions is known and it can be determined whether his mobility needs meet program criteria.
Due to this barrier his family is not able to access respite support which they are in need of to ensure Henry can receive all of his intensive therapies after each surgery and his parents can make ends meet for their family.

Variety’s Special Needs Program has supported Henry and his family for the last several months by covering the cost of respite care which has made a huge difference!
“We were able to find a wonderful respite worker and the family is thrilled with her support and are so thankful! Henry is already showing more progress in his development and openness to exploring new things, and having new experiences with her. Mom and Dad have had a bit more time for self-care and to better manage their schedules, and Henry’s needs.” – Family’s Rehab Counsellor

Make a difference, give the gift of confidence. Give